During the process of thermoforming of plastics, a flat thermoplastic sheet is heated and formed into the desired shape by means of a mould. Thermoforming consists of two main steps: heating and forming.

After the heating, the sheet is transported between the open mould. The mould closes until the sheet is clamped by cutting half of the sheet thickness. The plug stretches the material into the cavity of the mould and compressed air pushes the sheet equally against the mould. The special design of the plug head and adjustable depth allows adjustments to obtain an even material wall thickness. The choice of plug material(s), such as polyamides, syntactic foam, aluminium, etc., and shapes are designed to suit the final article design.

Moulds for forming and cutting in the mould for processing are offered in a wide range of thermoplastics, including PP, PS, PVC, APET but also PLA and other biomaterials. Single, double and even triple or four row mould are possible on MEAF's machines. Modern technique allows easy & fast changes of mould inserts for side and bottoms.

After cooling the product, the mould closes the last 2 mm and performs the cutting of the product from the web. After this process the mould opens and the products are pushed/blown out of the mould into a stacker. During this process new, heated sheet has been transported between the mould to repeat the cycle. 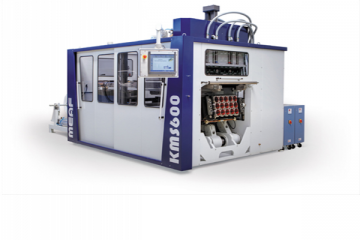